Focus turned to Matchday 8 between the high-flying Olads and The Entrance at our home ground, Duffy’s Oval.

The squad were buzzing coming off a 9-point weekend in the derby against Avoca and were itching to get at an Entrance squad that were producing some good results in all grades.

Whilst the opposition posed a big threat for the squad, it seemed that the weather would be our biggest threat as wild dry winds affected gameplay throughout the day.

But this did not stop this squad, who went on to collect another 9 points, and ANOTHER 3 clean sheets leaving the squad to put 8 goals past the opposition in another successful outing for the Terrigal BPL squad.

Below are the match reports for each grade:

Hot and wild winds met the 21s with the first match of the day, the warm-up proving conditions would play a big part in the match and not allow the free-flowing football we are used to playing. In saying that, confidence was high coming off a nice win against Avoca the week before and the boys were ready to take 3 points off The Entrance at Fortress Duffy’s which would give a 6-point gap between us and third place.

The first half was an evenly fought affair, both teams having a share of possession and chances but battling not just against each other, but a fierce wind coming from the Southern end of the pitch.

The Entrance started well and were able to hold the ball well keeping us pegged back in our own half for a good 10 minutes, they were able to get a few opportunities on goal but not enough to open the scoring.

It was a tightly contested half, most of the ball played in the middle of park for the remainder of the half, chances coming here and there but it wasn’t until The Entrance got a sight on goal that they were able really test Terrigal keeper Owen Stefani, who was able to smartly save a dipping, swerving strike which ricocheted onto the crossbar eventually cleared by the Terrigal defence. A warning sign from the opposition, but not enough to get past the young keeper’s trusty hands.

At halftime, the message was clear and simple, it was a battle and we were the only ones that could determine the outcome of this game. A big effort would be required in the second stanza to put the opposition away.

The boys came out and started very well, getting back to the basics, and playing some simple passing football to work their way up the pitch. The Entrance though, they were not going to crack easily. The opposition were taking hit after hit, whilst also getting their own chances on goal, but neither team were able to open the score although, a break-through was looking likely.

Midway through the second half there was a clear need to get a fresh spark out on the park, all players giving their all but the conditions proving to play a big part in the match. This meant an end to veteran Terrigal player Mitch Jury’s time on the park today, after a solid performance keeping out The Entrance attack from scoring, he made way for Brayden Tait to enter the match. Almost shortly after this, Assistant Coach and legend Olad Scott Austin made the call to come off with a suspected knee injury, this paving the way for Kynan Currey to make his mark on the team and settle into the holding midfield role.

With these 2 subs the team were able to settle back into play, and with one more substitution, Josh Reed made way for Billy Williams to enter the fray and provide some disruption to The Entrance defence.

Within 5 minutes the boys started to show some real promise and started to gain some momentum with chance after chance on goal. Captain Jarryd Pryce was clearly liking what he was seeing, pumping up the boy’s numerous times shouting “It’s coming lads, it’s coming!” And wouldn’t you know, Captains intuition kicked in and Judah Mills made a beautiful run up the right flank to cross in a ball to Spiros Depountis who seemed to have all the time in the world to do one of his (now) trademark turn and shot to fire the ball into the net putting Terrigal up 1 nil.

This goal brought a spark to the lads as they continued playing some very positive football which lead to a lovely through ball for Billy Williams who jostled with the last man to show great pace and muscle working past the last man to calmly slot the ball beyond the keeper taking Terrigal to a commanding 2 nil win.

The final minutes of the game were largely controlled by Terrigal and could have / should have had a few more added to the scoreboard but eventually came away 2 nil winners against a tough opposition.

Coach Justyn Simonet said after the match, “This was a truly gutsy performance, and one you should all be proud of”. This win taking Terrigal to outright top of the league for a few hours until Killarney decided to share their result, which to our disappointment was a win, keeping the young Olads equal first with Killarney for another week.

Ressies came into this match sitting outside the Top 4 due to midweek catch-up games, the boys knew that 3 points here would get them back into the finals places.

The game started with some very attractive football by both teams, the proof was in the play as to why these two teams were sitting in the top half of the league. The Entrance were keeping the ball well and testing out our defence, but Terrigal were able to hold them out and eventually start to show their quality with some slick play around the attacking half.

As both teams continued to search for the opening goal, it was the Terrigal boys who found themselves in front midway into the First Half thanks to a tidy finish from Alex Ford.

The goal from the Orange and Black helped settle the game into their hands, as they continued to make chance after chance in the backend of the First Half with Fordy finding more space behind the defensive line to bag his second goal of the match right on halftime. The 2-nil score line to Terrigal was much deserved but the lads knew a strong Second Half would be needed to seal the win.

And it would only take seconds after the restart for Terrigal to remember the game was not over, when a mistake by the Terrigal defence lead to a one on one chance which keeper Riley battle fortunately handled with ease, much to the displeasure of The Entrance who could have made a real statement of intent early in the Second Half.

A wake-up call for Terrigal, they got back into the game with 3 solid chances to extend the lead which they were unfortunately unable to do. But the signs that the boys had lifted once again brought some calmness to Ash’s Corner who feared the dreaded 2 nil score line might be at risk.

15 minutes into the second half, Captain Ben Morton went down with a suspected ankle injury, with Naveen Mal being asked to deputise in the middle and Luke Stefani coming off the bench to Left Mid.

Terrigal were caught a few times by the opposition as The Entrance tried to battle their way back into the match, but to no avail largely due to Olad ‘keeper Riley battle who was called on to make a string of saves which kept Terrigal in front.

These misses from The Entrance started to take a toll on the opposition, with the match starting to drift away from the opposition as Terrigal went back into controlling proceedings.

With not too many highlights to speak of after this, the Terrigal lads dominated field position and possession which eventually the opposition crumbled to allow Fordy to complete his hat-trick and taking the lead to 3 nil.

Coach Dan Murace saw the opportunity to give some of troops an early-mark with the win in the bag, the mid-week fixture against Berkeley Vale probably had a bit to do with it. This gave Spiros Depountis and Josh Reed the chance to make a mark in Reserve Grade after impressing in the Under 21’s match earlier in the day. Whilst they were unable to help add to the lead, they were able to assist the team in keeping another clean sheet and helping them rise back into the Top 4 with a 3-nil victory.

This win then sets up a massive match midweek where they take on Berkeley Vale with 3 points here giving them the chance to go top of the league which would be a fantastic achievement given their start to the season.

The Olads squad and supporters had barely made it back to their seats after singing the team song for the second time today, when Lachlan Wilkinson had just gone and done it again by opening the scoring within 30 seconds of the match. Following last week’s goal within the first minute, Lachie was clearly out there to break his own record, showing he clearly likes to get his work done quickly. This goal, for the second week in a row allowed First Grade to settle into the match on go 1 nil up within the first minute.

The opening 15 minutes was largely Terrigal and they had another 2 chances to extend the lead but were not able to put the finishing touches.

The entrance made their way down to the Terrigal half and were unfortunate not to level with a nice cross and solid header that hammered against the crossbar.

A typically physical entrance team started to try force their way back into the match with some good ball play leading to opportunities, the Terrigal defence keeping them at bay.

7 minutes to the break, Terrigal had 2 opportunities from corners but unable to extend their lead.

With Ash’s corner building in attendance, the crowd was anticipating another Terrigal goal and whether it was the cheers from the warriors scoring another try or one of Bailey’s place bets coming up, the boys reacted and continued to pepper the entrance goalmouth, and Cameron Wilkinson pulled one out of the top draw hitting it top bins and taking 2 nil up.

Chances aplenty kept coming for the boys in black and orange, but the finishing was just a bit off keeping the boys at 2 up.

In the closing stages of the half, the entrance had a great chance to get on the scoresheet only for Craig James to make an incredible save keeping his sheet clean. The leagues ‘biggest diva’ was unable to clean up the scraps with his shot going well wide.

Half time – 2 nil with Terrigal in control.

The second half was much more of a contest with The Entrance lifting their intensity to match the Olads but their attacking efforts weren’t matched with the clinical finishing that the hosts were able to produce in the first half, showing a clear gap between the two teams.

Terrigal continued to keep possession and fight their way through the increasingly difficult conditions as the sun started to come down over Duffy’s Oval. Chances kept falling to the Olads but some decent defending and saves from the visiting keeper kept the lads from adding to the scoreline.

It wasn’t until very late in the second half that Terrigal were able to add to the score sheet, as Daniel Tuddenham made a clever run into open space and produce a quality strike from an almost impossible angle to give them a clinical 3 nil victory and opening up a 7-point gap between 2nd and 3rd place. 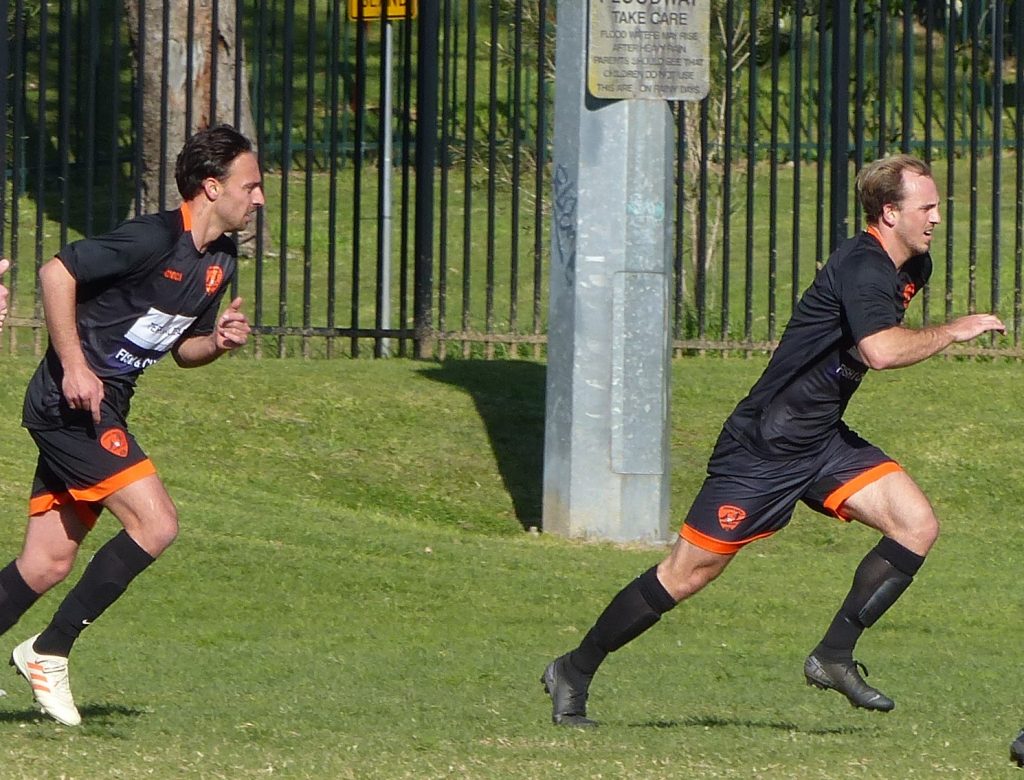